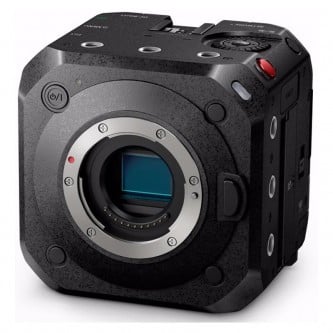 The V-Log L featuring log characteristics with 13 stops of wide dynamic range is pre-installed. It is also capable of C4K/4K 4:2:2 10-bit output via HDMI.

The LUMIX BGH1 benefits from a new heat dispersion structure to achieve unlimited video recording. The body frame is composed of aluminum and magnesium alloy, making the camera both durable and lightweight.

In addition to a USB 3.1 Type-C port, it is also equipped with a 3G-SDI and a HDMI Type-A terminal, which can be used for simultaneous output. Furthermore, Genlock IN and Timecode IN/OUT functions which enable multi-angle synchronised video recording are available, allowing the user to build a scalable system with external monitors, rigs and gimbals supplied from other manufacturers.

The LUMIX BGH1 is equipped with a double SD Card slot for backup recording or relay recording.